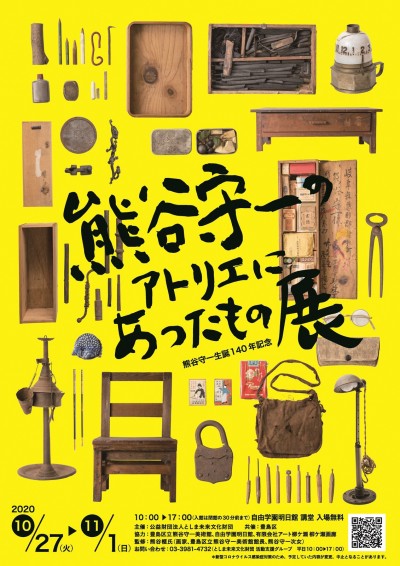 Morikazu Kumagai was born in 1880 in Tsukechi-mura, Ena-gun, Gifu Prefecture (currently Tsukechi-cho, Nakatsugawa City). Moved to Tokyo at the age of 17 and entered the Western Painting Course of the Tokyo Fine Arts School (currently Tokyo University of the Arts) at the age of 20. I belonged to the Nika Association before the war for a long time.
He moved to Nagasaki-cho, Toshima-ku (currently Chihaya) in 1932 with his family and spent 45 years there until he died in 1977 at the age of 97.

In 1984, some of the relics left in the atelier were donated to Toshima Ward by Mr. Kaya Kumagai, the first daughter of Morikazu Kumagai.
The following year, Mr. Kaya Kumagai opened the Kumagai Morikazu Museum in the place where the atelier and the garden were, and in 2007 it became a ward museum. It is popular as a museum where you can always see the works of Morikazu Kumagai.

In this exhibition, mainly the materials donated to Toshima Ward, paintings, books, craft tools, handmade chairs, desks, and other items that are familiar to Moriichi will be exhibited at once.

At the same time, a number of photographs of Takeshi Fujimori, who took pictures of Morikazu Kumagai in his later years, and two works by Fujin no Tomosha's collection are also on display. It will be a unique opportunity to touch Morikazu Kumagai's undecorated face. The exhibition that makes the best use of the appearance of the Jiyu Gakuen Tomorrow Hall Auditorium, which is a nationally designated important cultural property, is also a highlight.

[Homepage of this exhibition] https://www.toshima-mirai.or.jp/tabid216.html?pdid1=2347