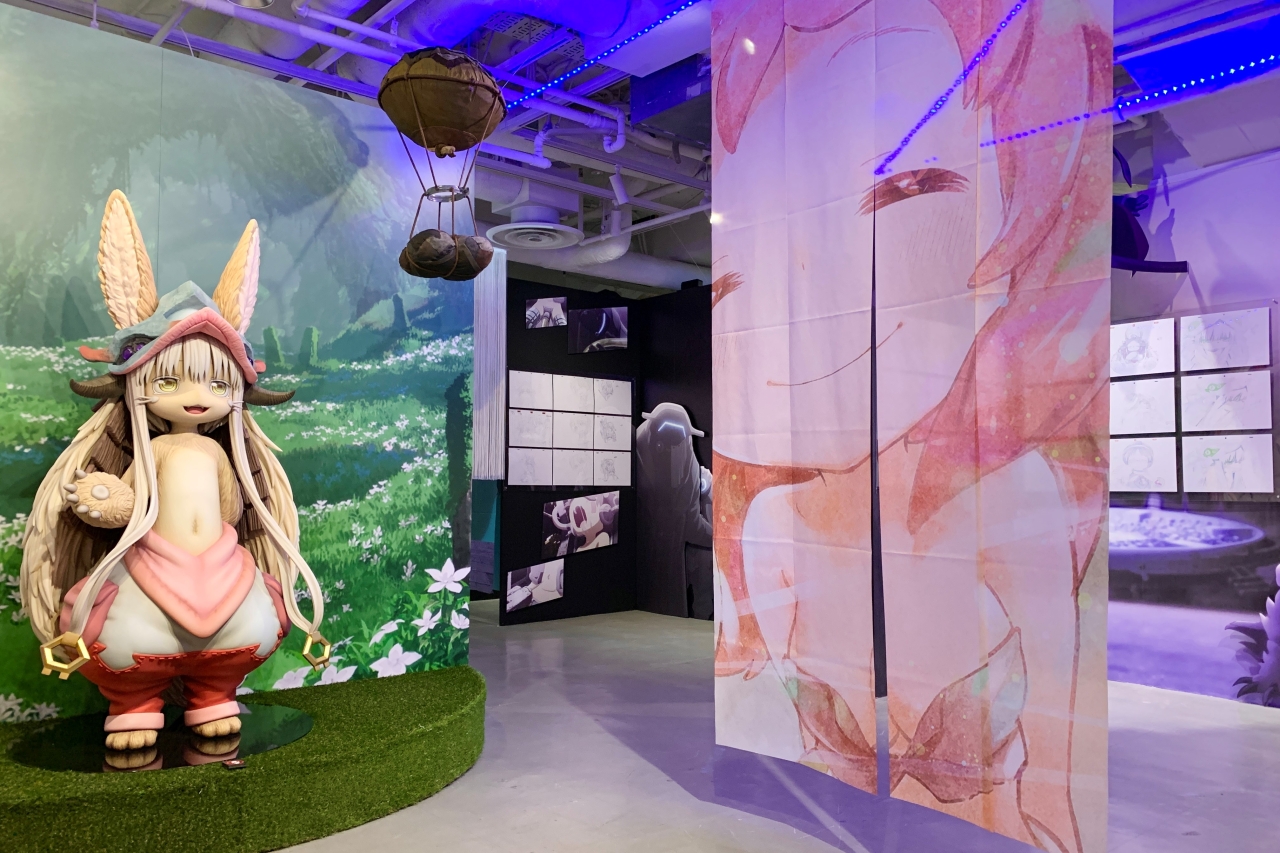 The first large-scale exhibition “Made in Abyss Exhibition-Trails of Challengers-” commemorating the broadcast of the TV anime “Made in Abyss” will be held from Friday, September 2, 2022 at Ikebukuro Parco Main Building 7. It will be held at PARCO FACTORY on the floor.

This time, I went to the press preview that was held prior to the event, so I would like to tell you about the atmosphere and impressions of the venue!

Special video content that can only be seen at the venue! "Made in Abyss Exhibition-Trajectory of Challengers-" 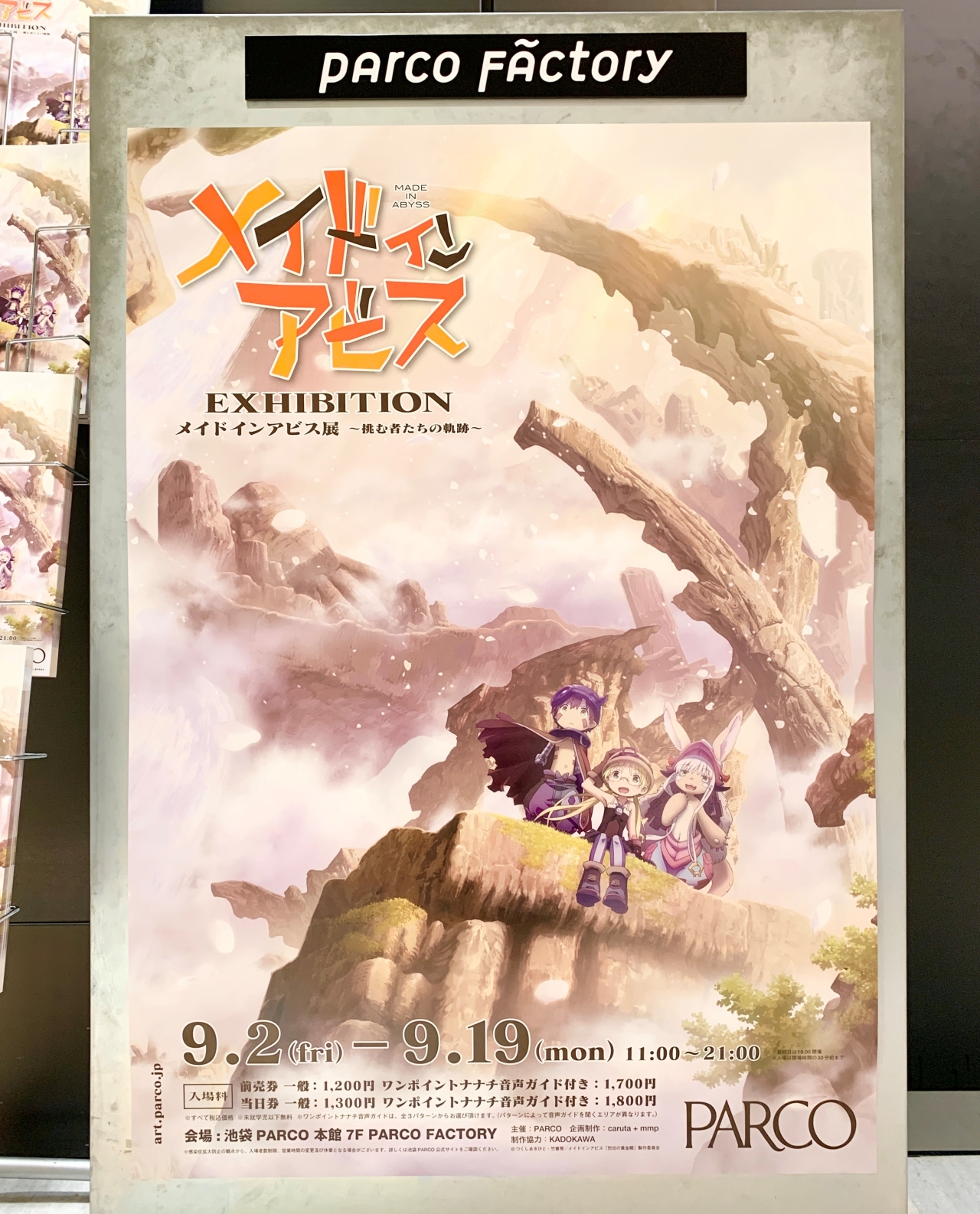 Made in Abyss Exhibition

"Made in Abyss" is an anime work based on the manga of the same name serialized in "WEB Comic Gamma" by Akihito Tsukushi. An adventure fantasy depicting the adventures of Riko, a girl who is an apprentice explorer, and Reg, a robot boy, set in the huge hole "Abyss" where mysterious relics sleep. 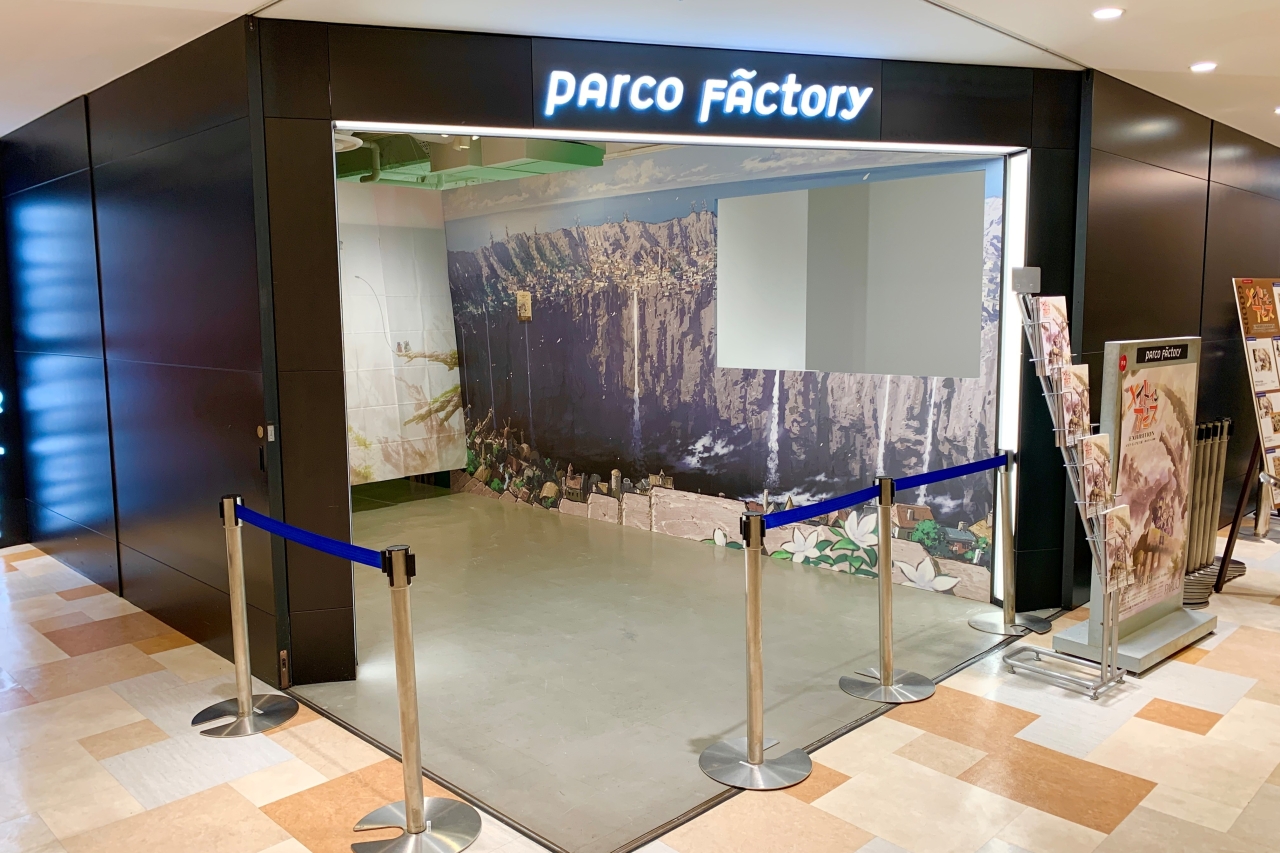 From the first season of the TV anime to the theatrical version, you can enjoy the exhibition of original drawings and setting materials of the second season, special video content, exhibits of relics that appeared in the story, and photo spots where you can experience impressive famous scenes. I'm here. 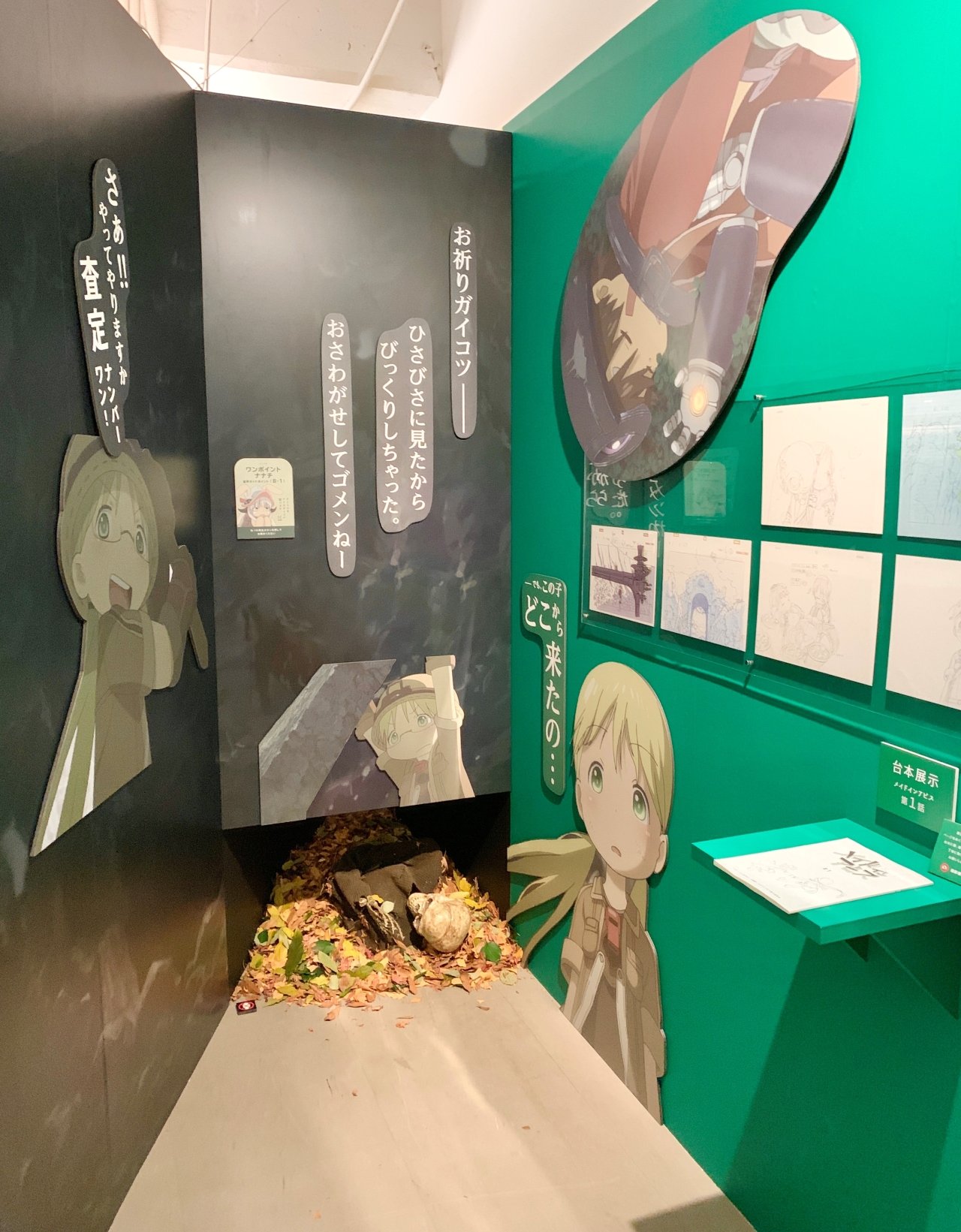 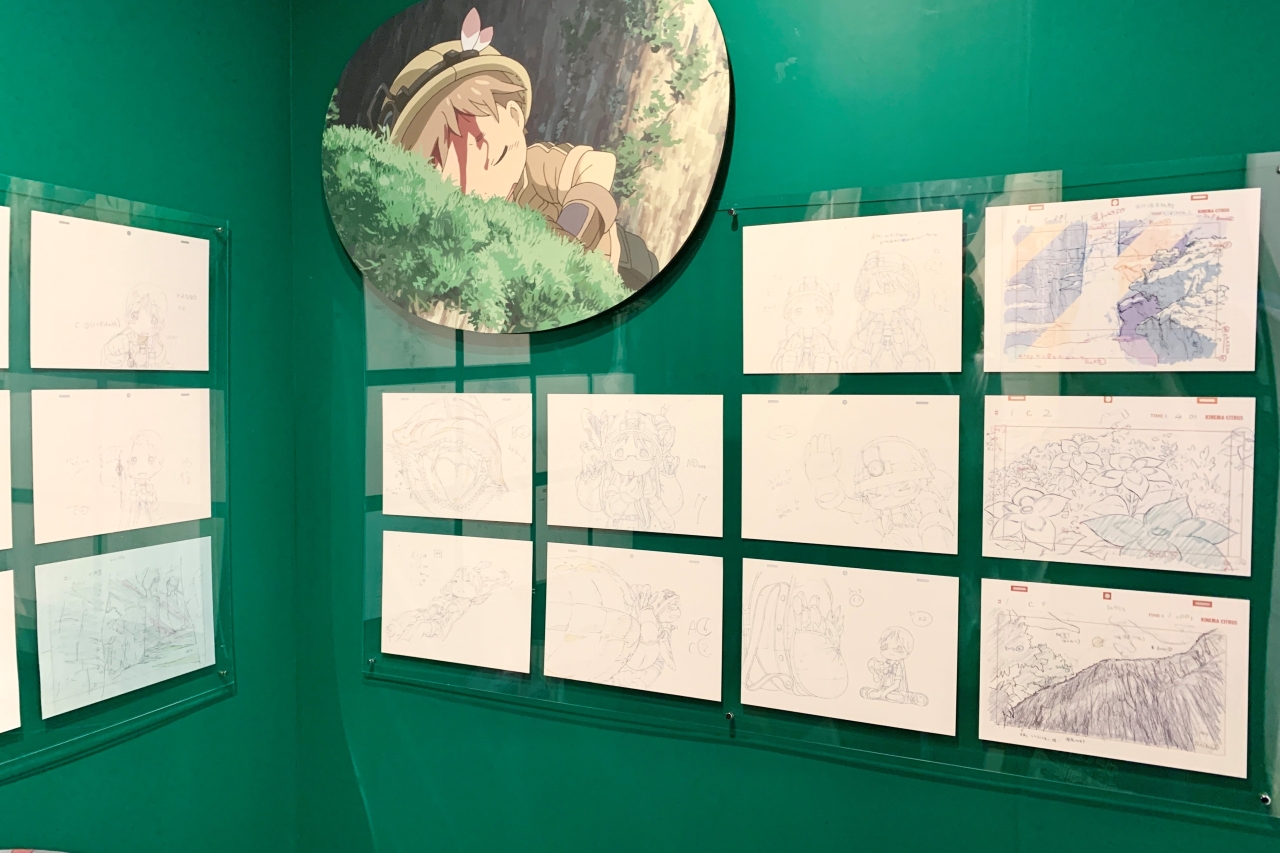 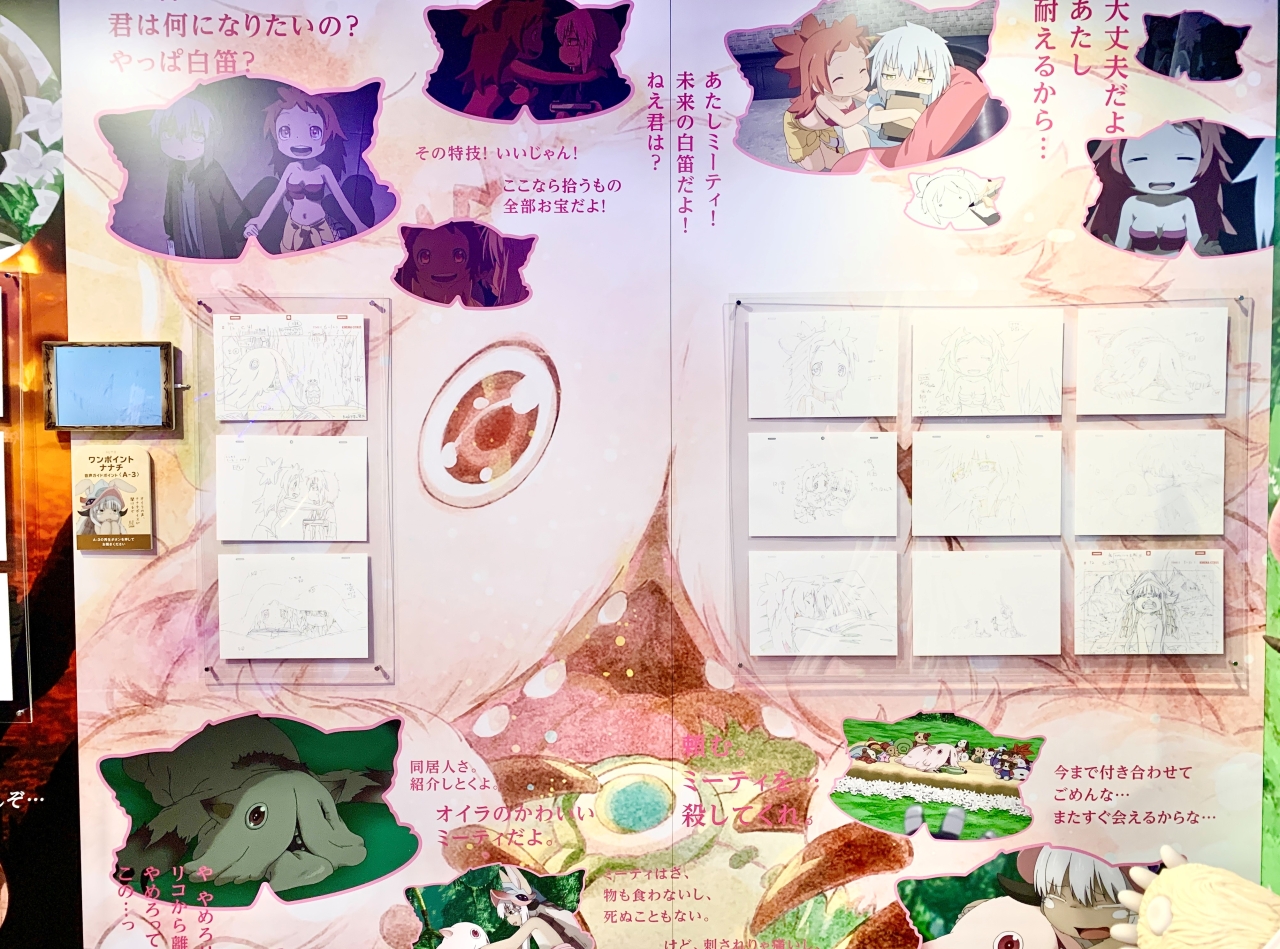 The original painting exhibition was colored with the impressive lines of the characters.
(I can't post detailed images of what kind of original art there was, so please check it out at the site!)

It's been about five years since the first season aired, and even those whose memories have faded will surely relive the excitement of those days if they come to this event. 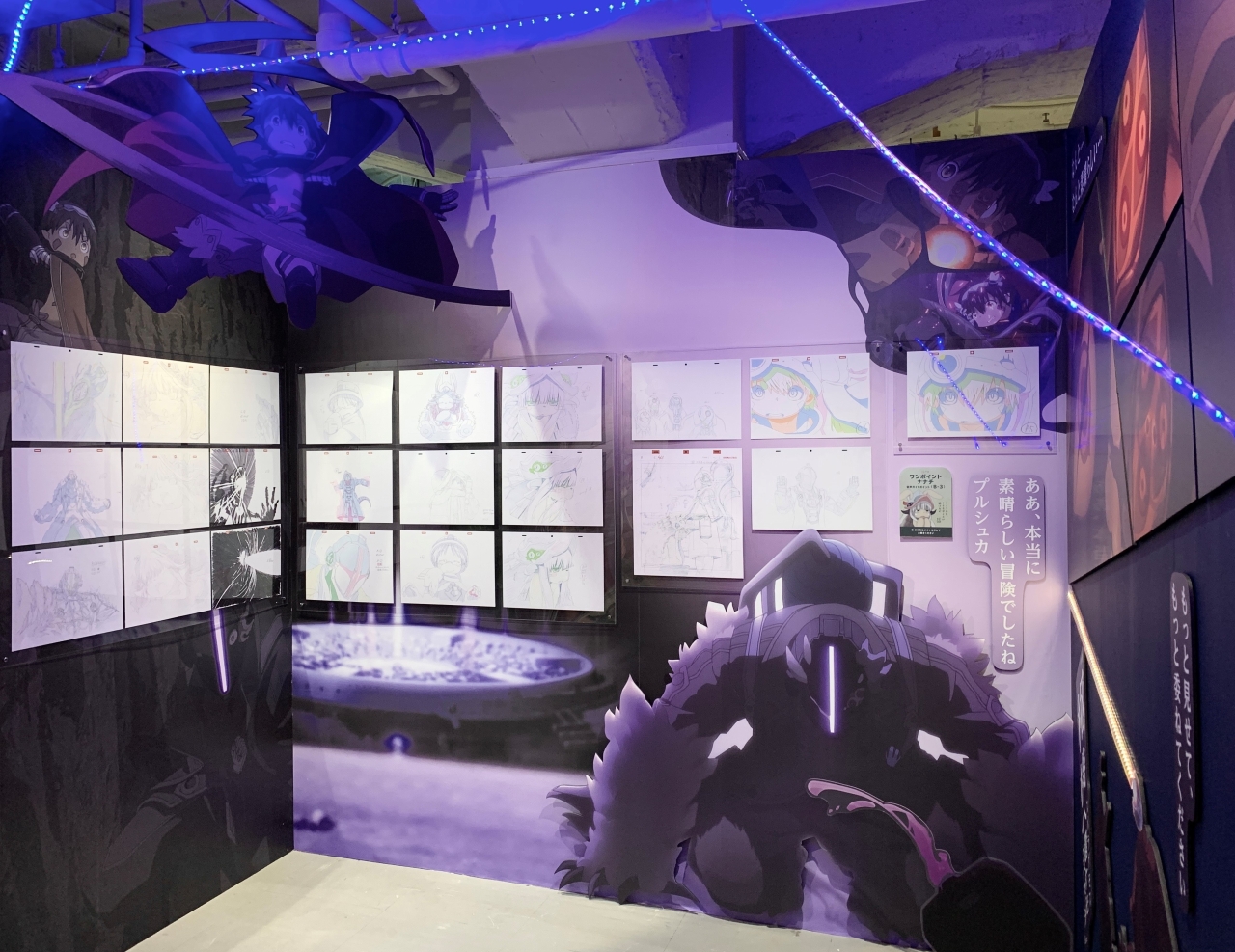 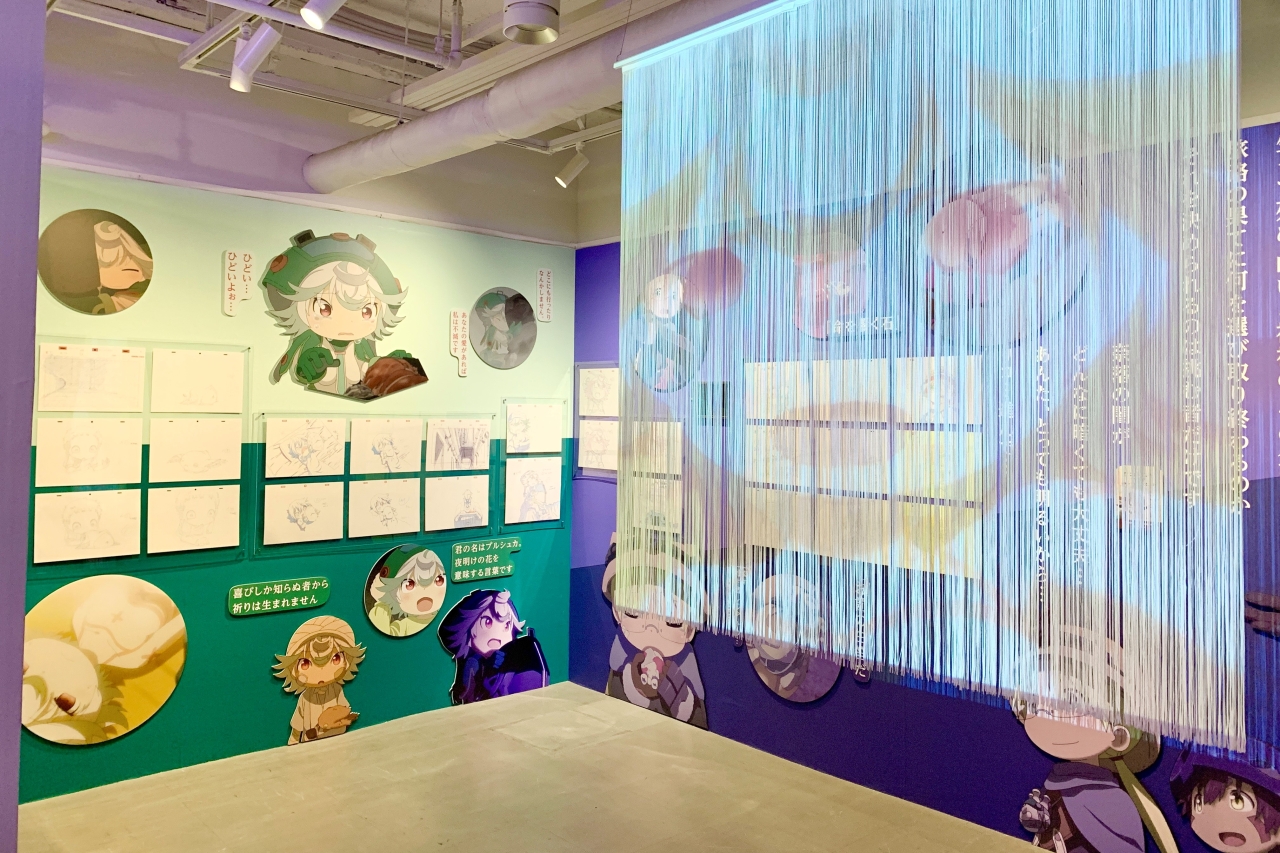 I also remember the interaction in the movie version with Lord Bondold, the apex of the cave explorer, the "white flute," who instilled trauma in the viewers with his cruel deeds, and his kind-hearted daughter, Plushka. At the same time as the exhibition, the voice of the brave Plushka wishing for her father and Rico to reconcile was played in the venue, and it made my heart ache. I'm Bondold… 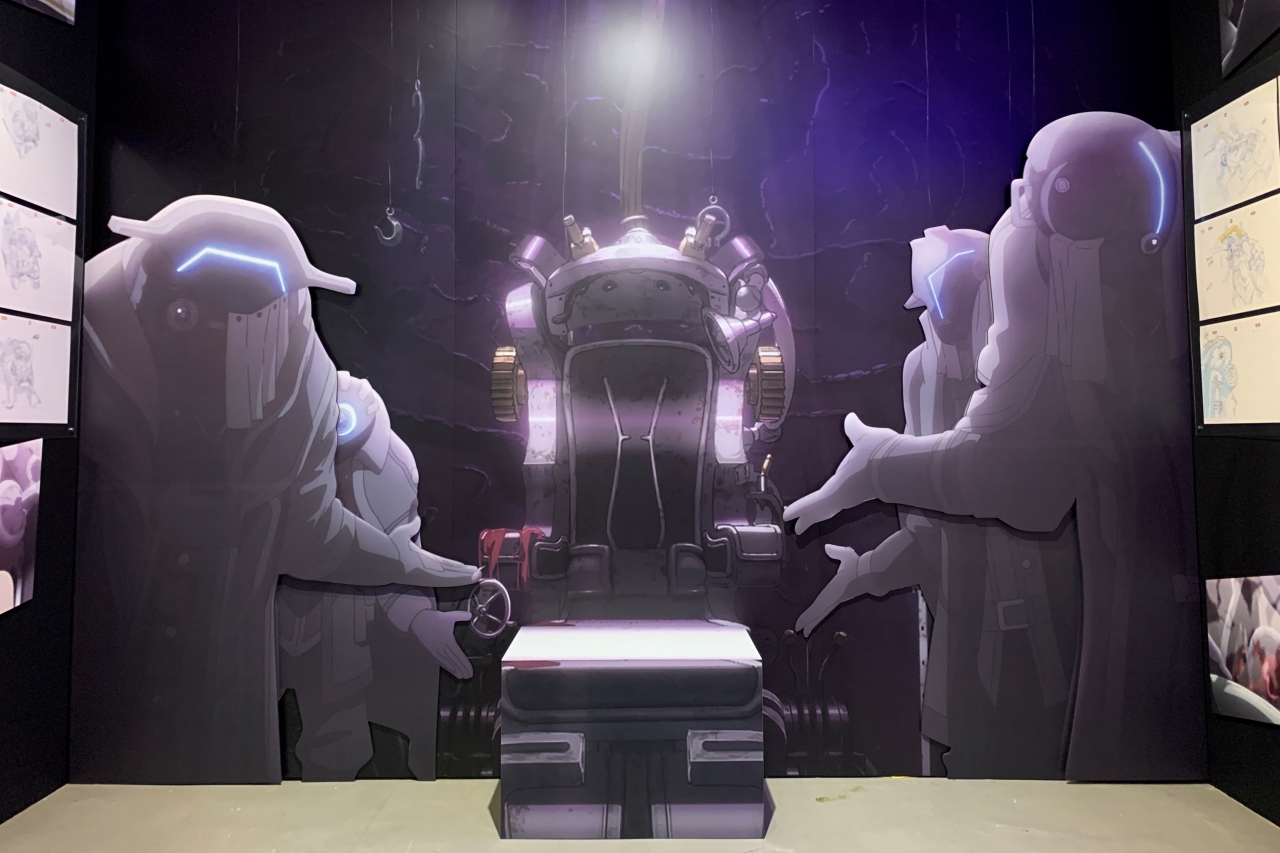 There are several photo spots, but some scenes were chosen that made me wonder, "Maybe Bondold chose it?"

On the official page, it was written about the photo spot that “you can experience an impressive name scene'', but is this a name scene in the image …? ? Although it certainly left a lasting impression!
If you're a viewer, you want to sit down, but you don't want to sit down. 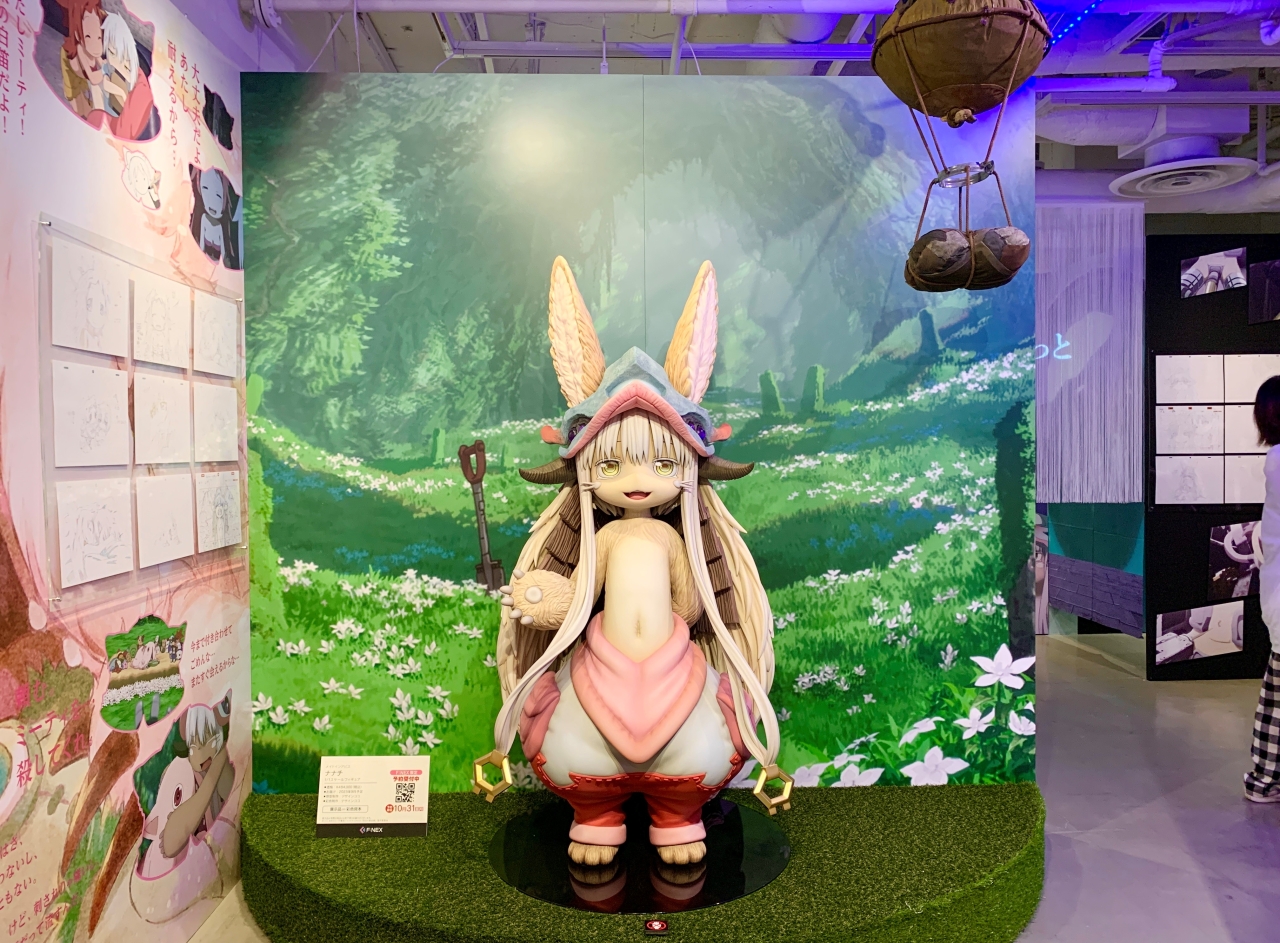 What really stood out at this event was the life-size figure of Nanachi, one of the most popular characters in the series!

It seems that the exhibition was decided in a hurry just before the opening. This event is scheduled to travel to Nagoya after Ikebukuro, but this life-size figure of Nanachi is on display only in Ikebukuro, so it's a must-see. 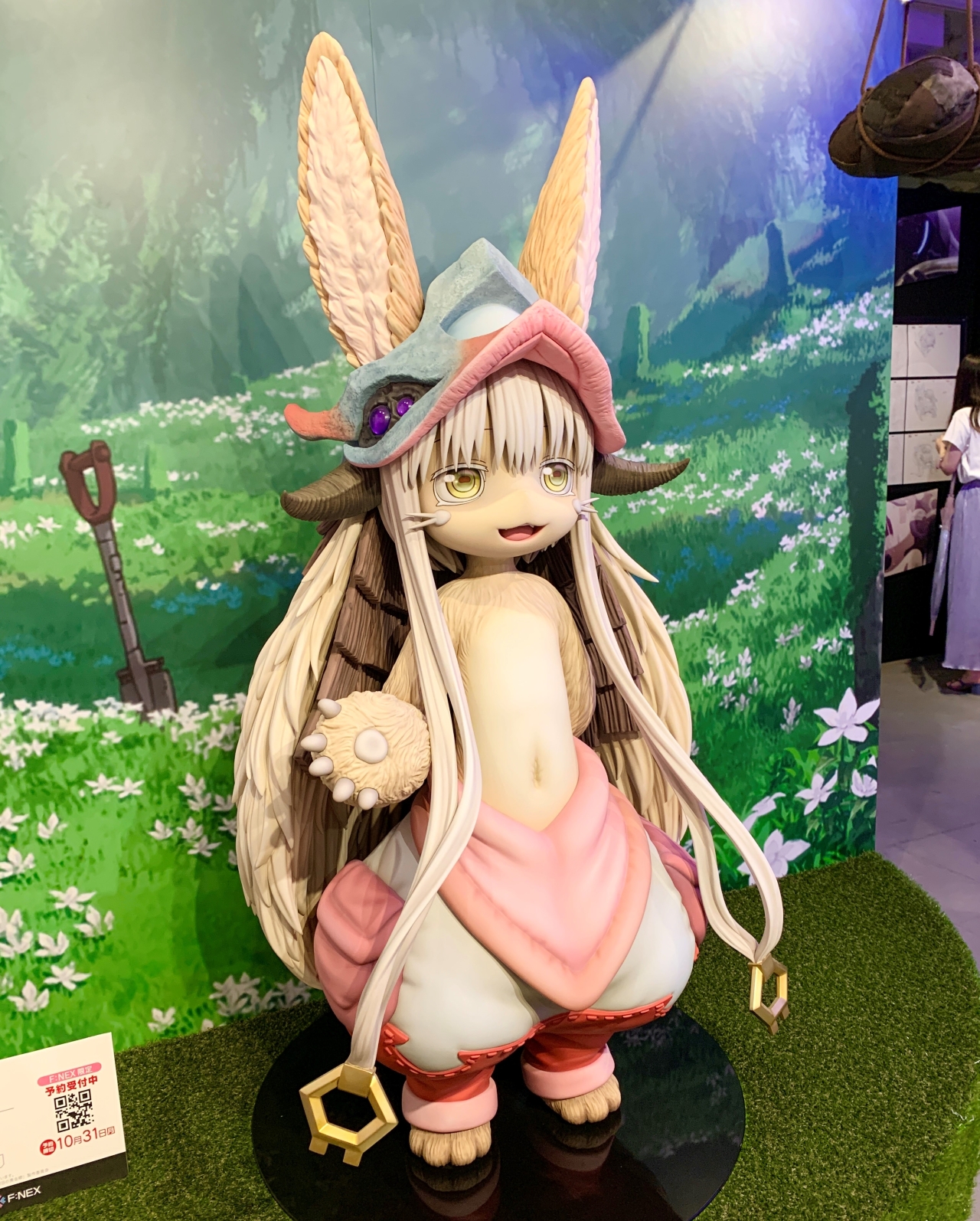 The sense of reality is amazing.

The fluffy fur that looks comfortable to the touch is also realistic. I can't get enough of the adorable expression that makes me want to say, "You're cute."

At the bottom left of the image, you can see the words "Reservation accepted", but it seems that you can buy this figure. It looks like it will cost 100,000 yen, but… some people may accidentally break their savings due to the overwhelming cuteness of the real thing. 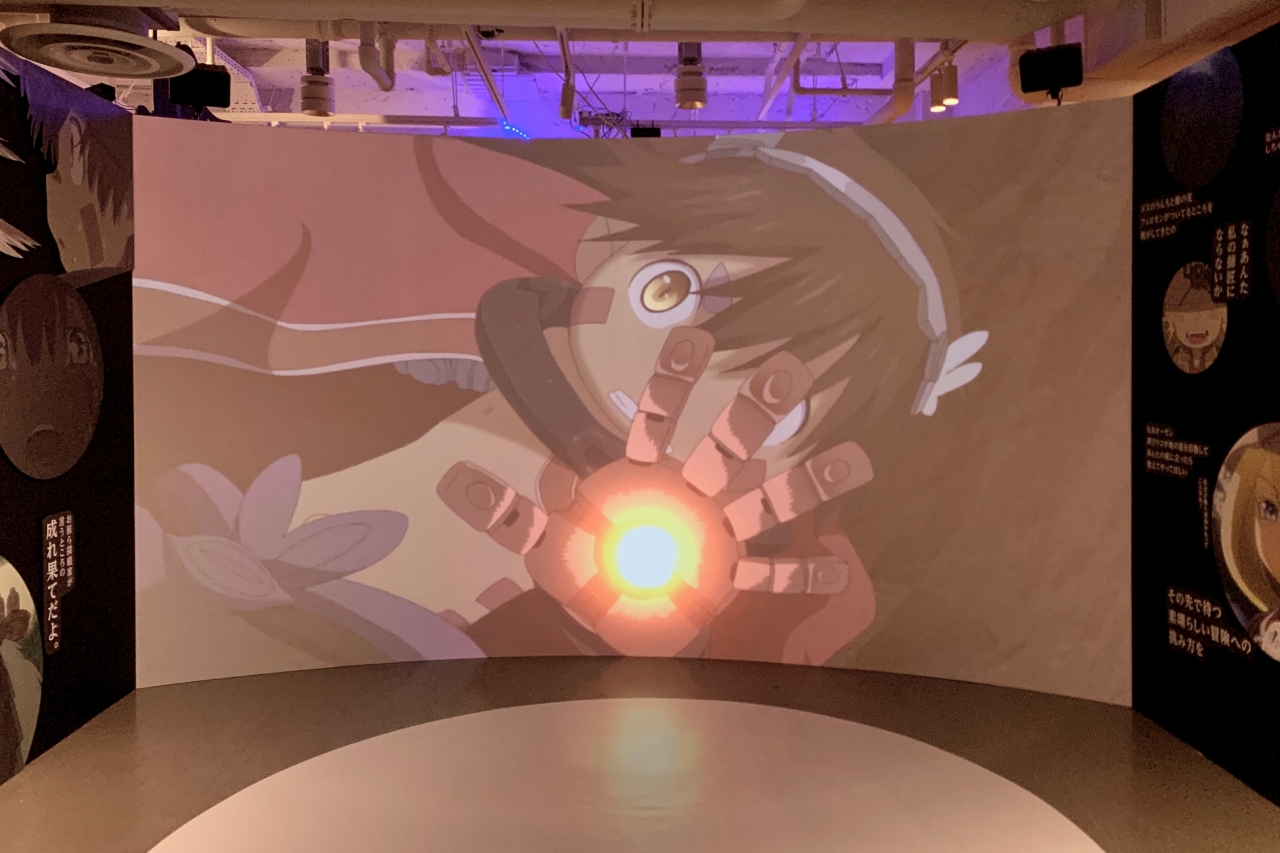 Don't miss the special video content that can only be seen at the venue, which is played on the big screen.

The special video content replaces a part of the main animation video with the original image, and you can get a glimpse of the production process in the video, such as the OP of the first season and the scene where Rico and Reg meet. 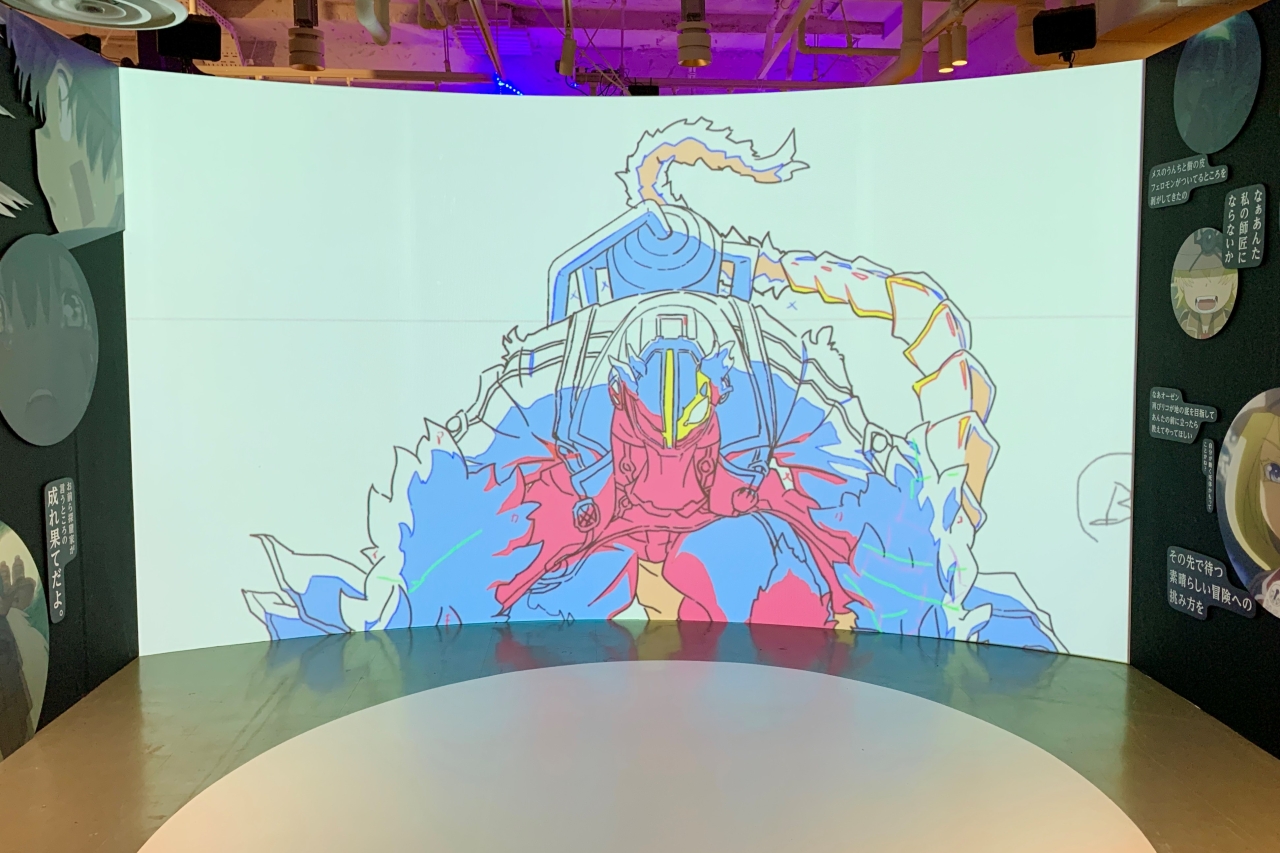 In particular, the powerful scenes such as the battle with Fudo Lord Ozen, one of the "white flutes", and the battle with Bondold in the movie version were selected, and I couldn't help but stare at them. 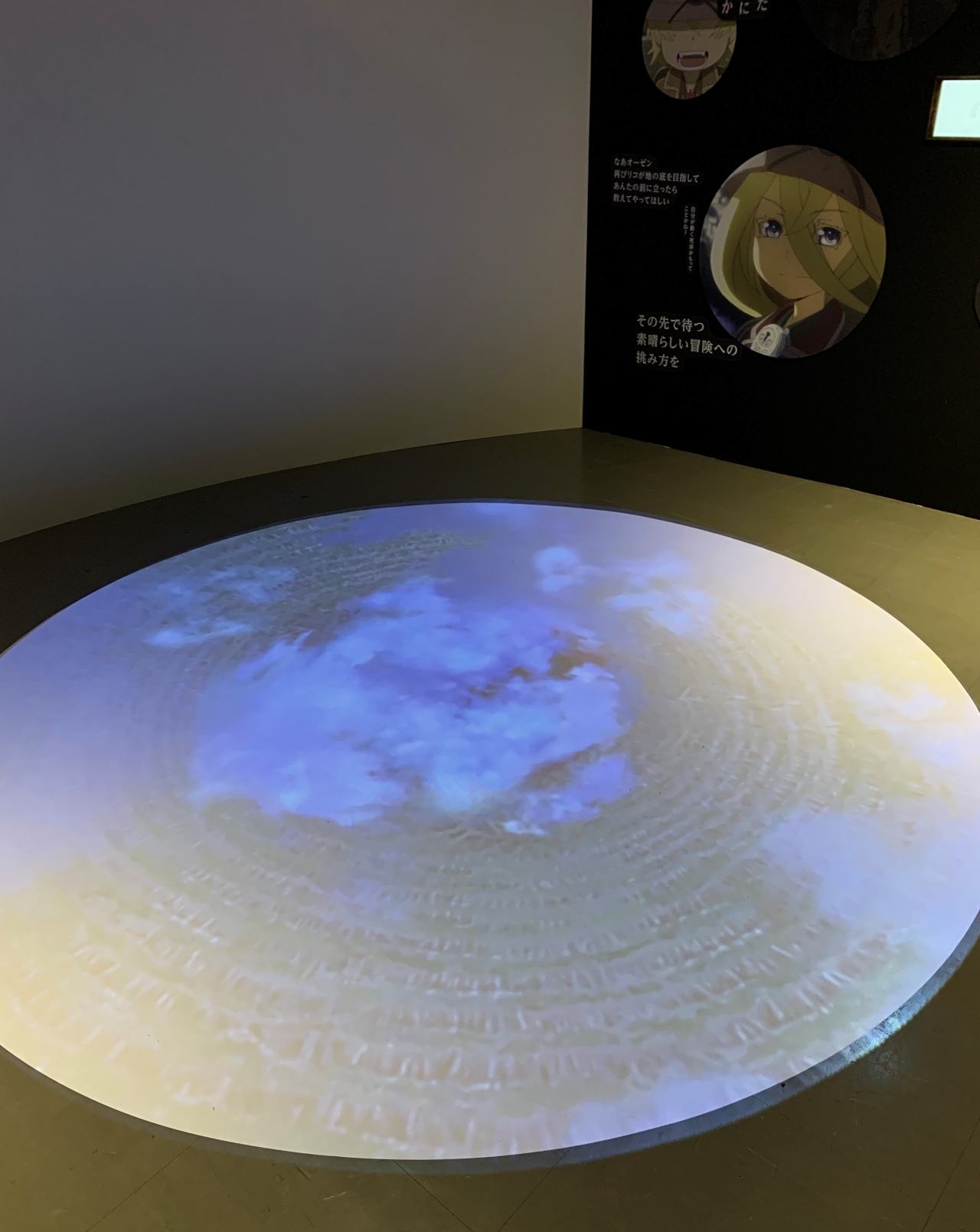 On the floor in front of the special video content screen, there was also a video exhibition that made you feel as if you were diving into the "Abyss". (Is it the same video that was played at the end of the first episode of the first season?) 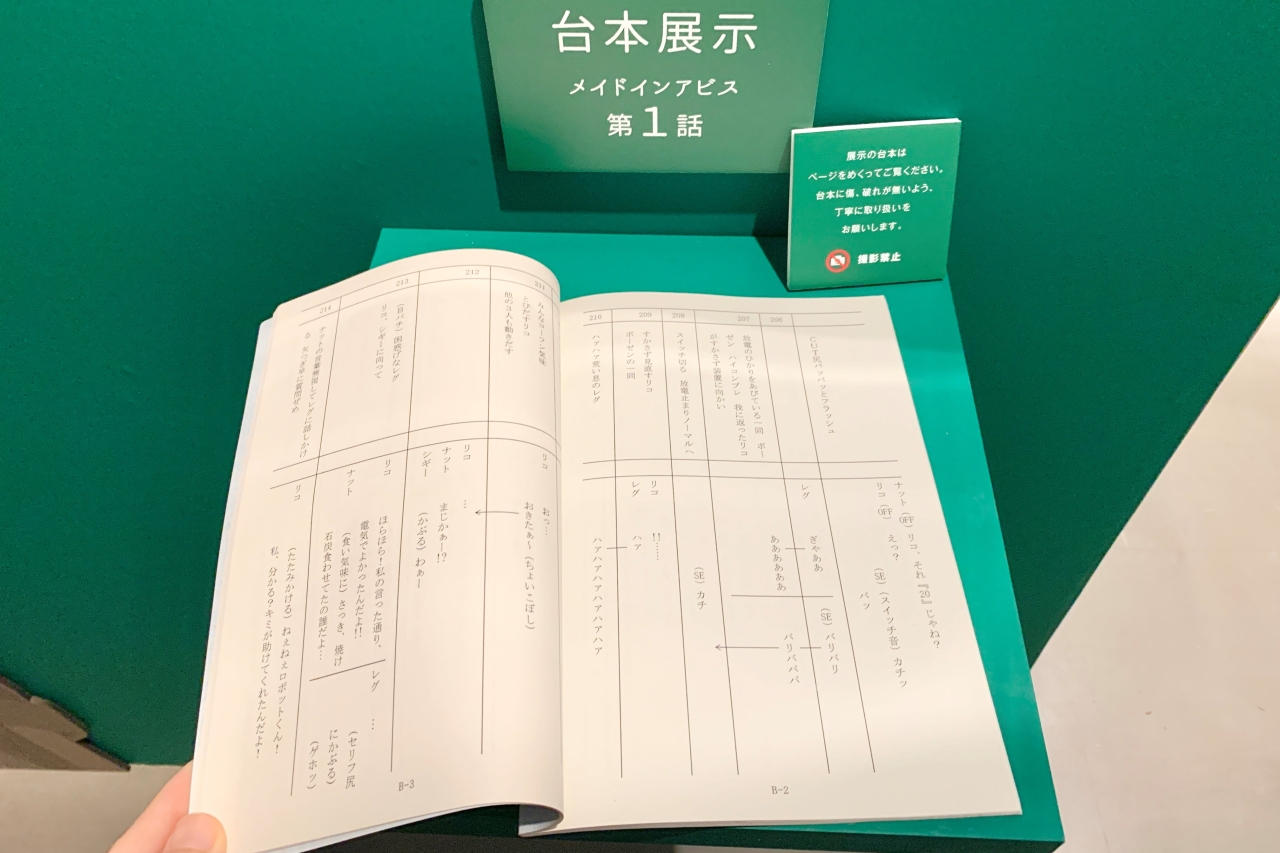 In the second exhibition, the elaborately crafted relic "Cradle of Desire" will appear! 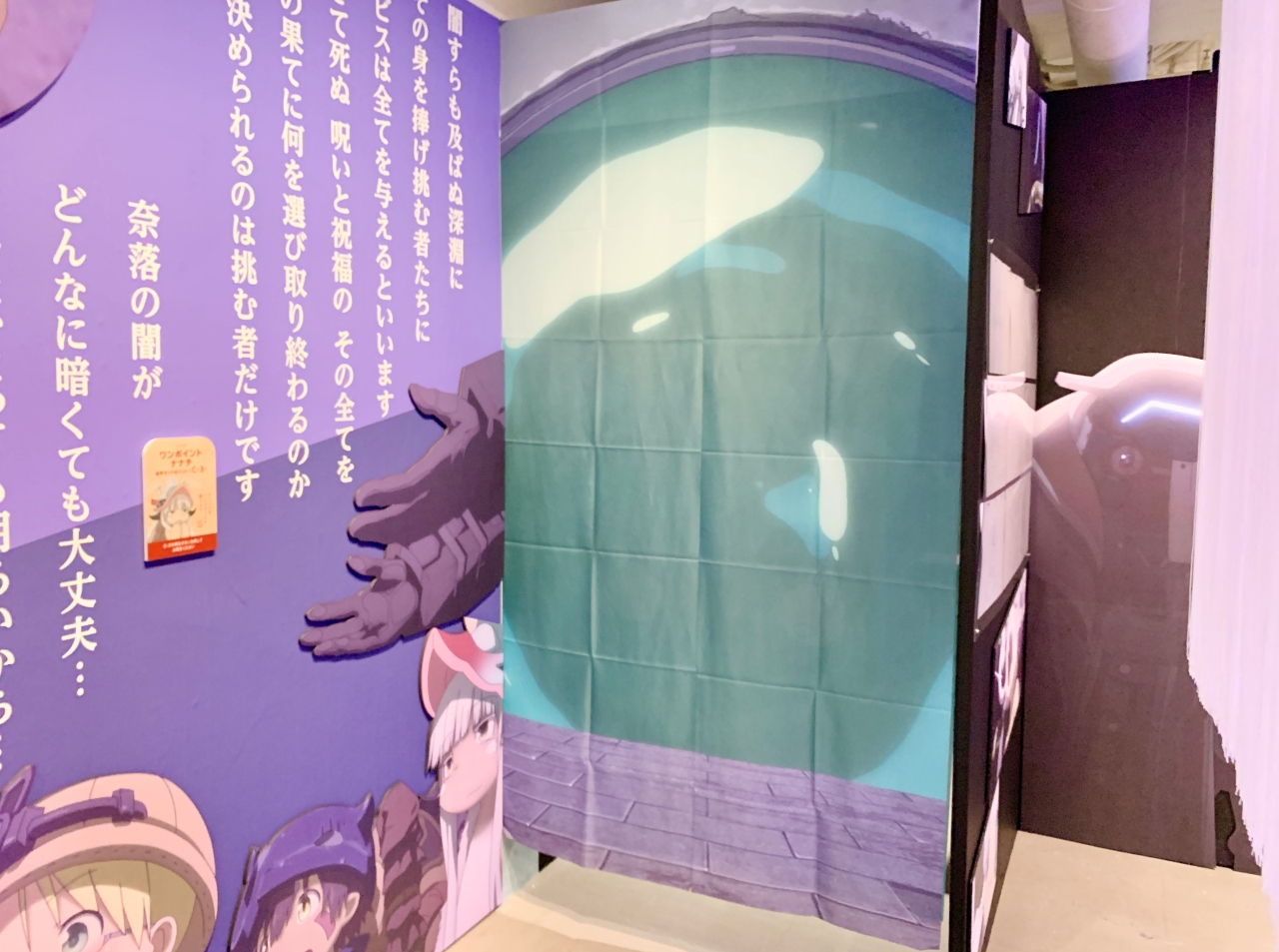 To the exhibition of the second stage of TV animation

The exhibition of the second stage of TV animation is at the end of this curtain, but unfortunately the whole view and original drawings are not posted because it is currently being acclaimed broadcast.

I will introduce the contents in a quick sentence, but the exhibition of the second period will also display the original drawings as before, and the setting materials of the "Ganja Corps" and the "made-up" that appear in the second period. There is also a beautiful art board and it is worth seeing.

In particular, the area centering on the elaborate reproduction of the relic "Cradle of Desire", which is the cause of the tragedy, is particularly powerful. I felt it in.

Also, as of September 2nd, up to episode 9 of the 2nd season has been broadcast, but at the venue, the key animation of episode 10 and part of the main video will be released in advance!

If you can't wait for the broadcast, please visit as soon as possible. 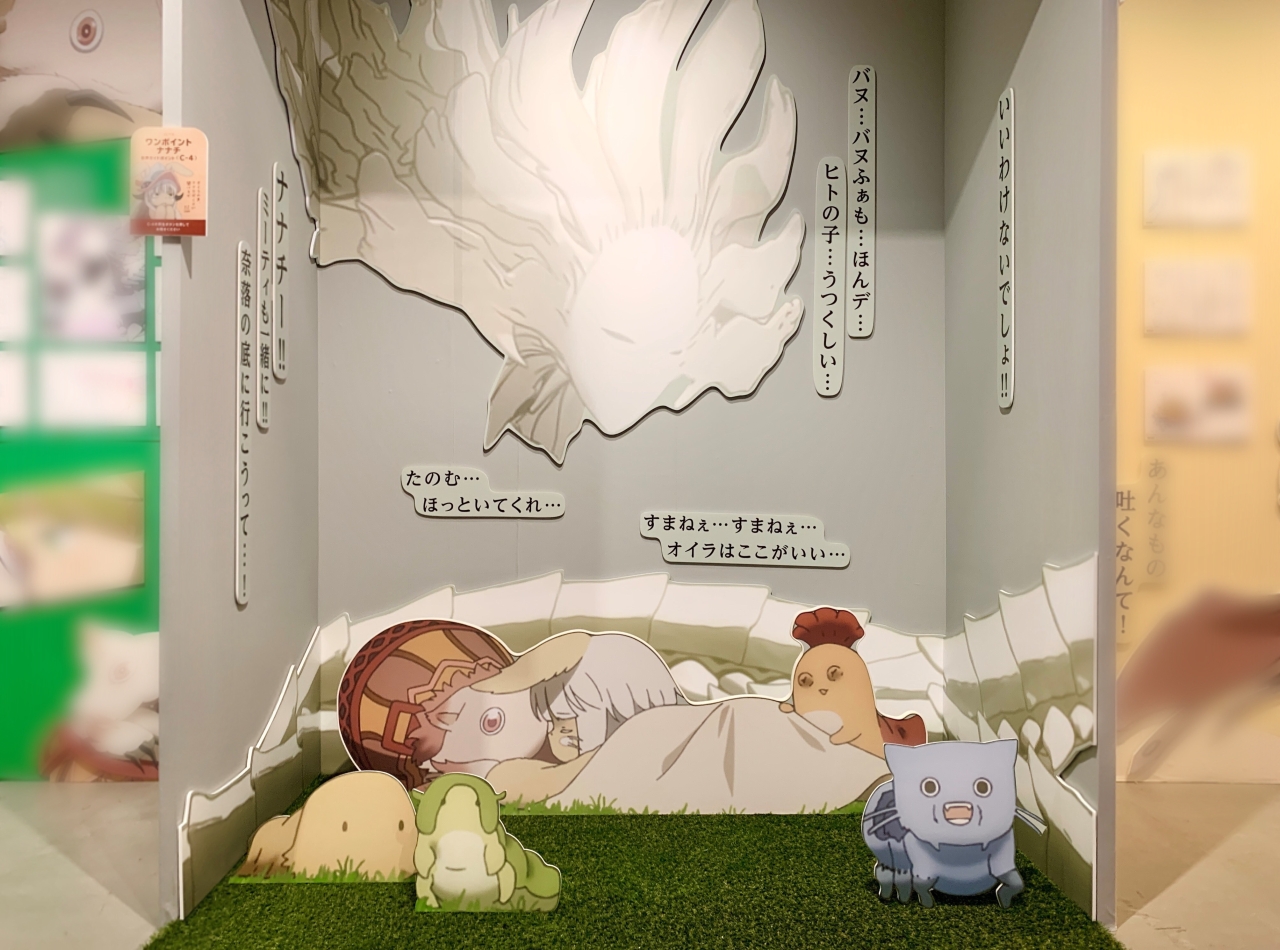 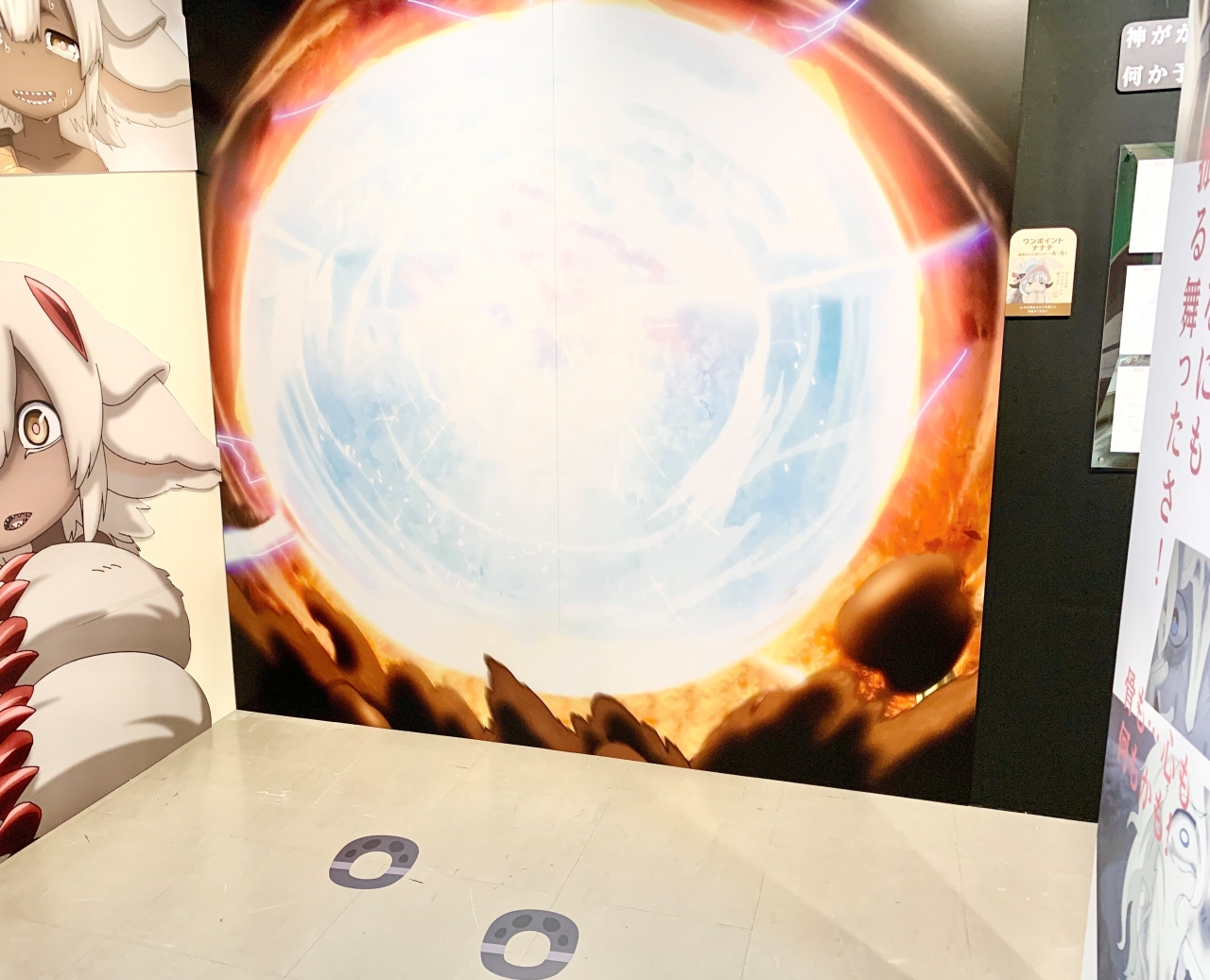 Since it was OK to post the panel exhibition and photo spots of the second period, I will introduce some of them. There is also a photo spot where you can take a photo of Reg's cremation cannon, so please try it. 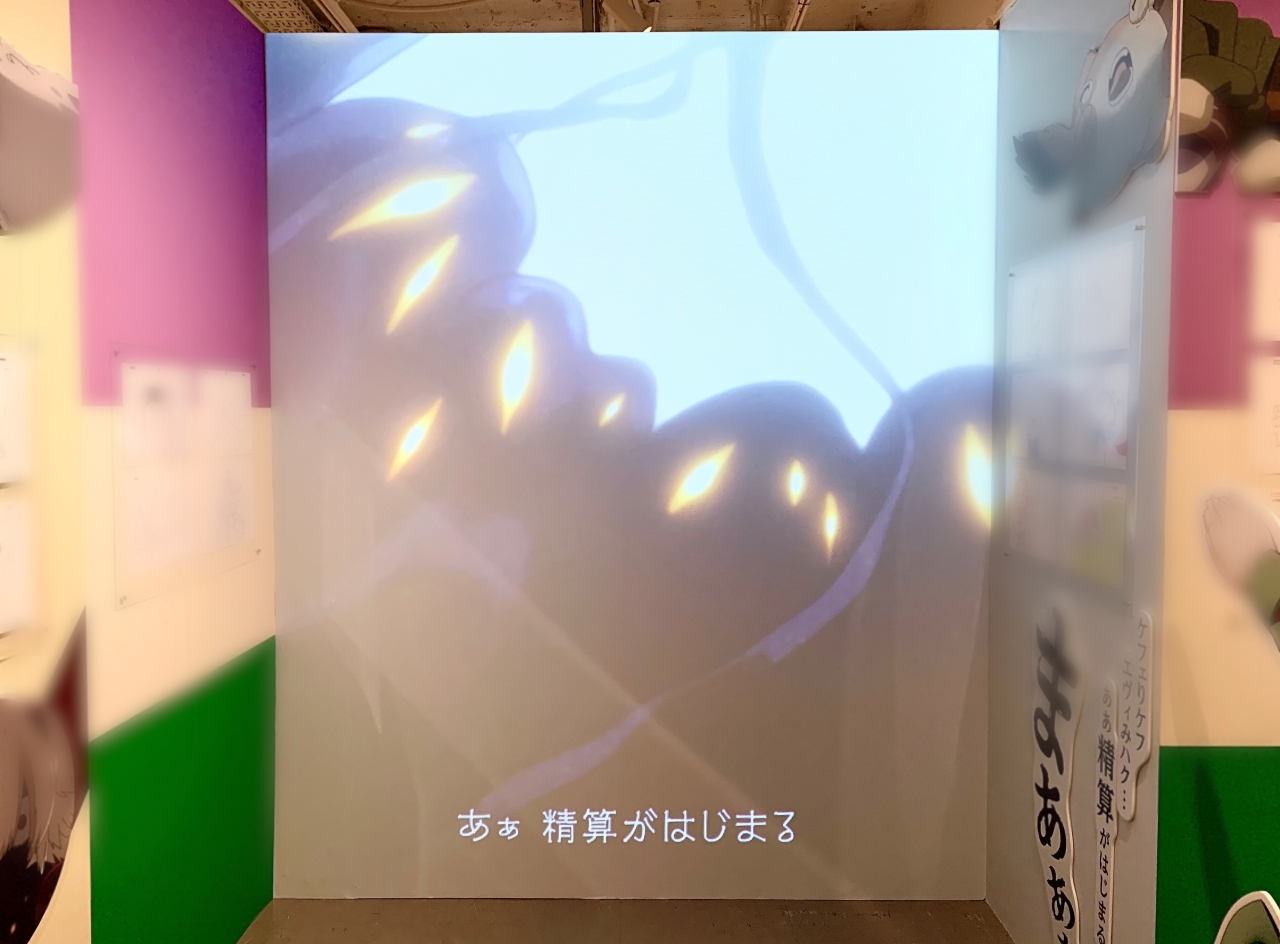 What kind of exhibition is this? There is also a picture that worries.

I thought it was a video exhibition, but I wondered if it was just the black swell that appeared in the "payment" scene of Mr. Maa's "settled village" and the coins that came out in the "payment" all the time. However, if it is a photo spot like "Why don't you also" pay "?" ?

I laughed a little when I noticed. It was a rather surreal space because Magicaja's shouts of "The billing begins…" and Maa's screams were repeated endlessly. 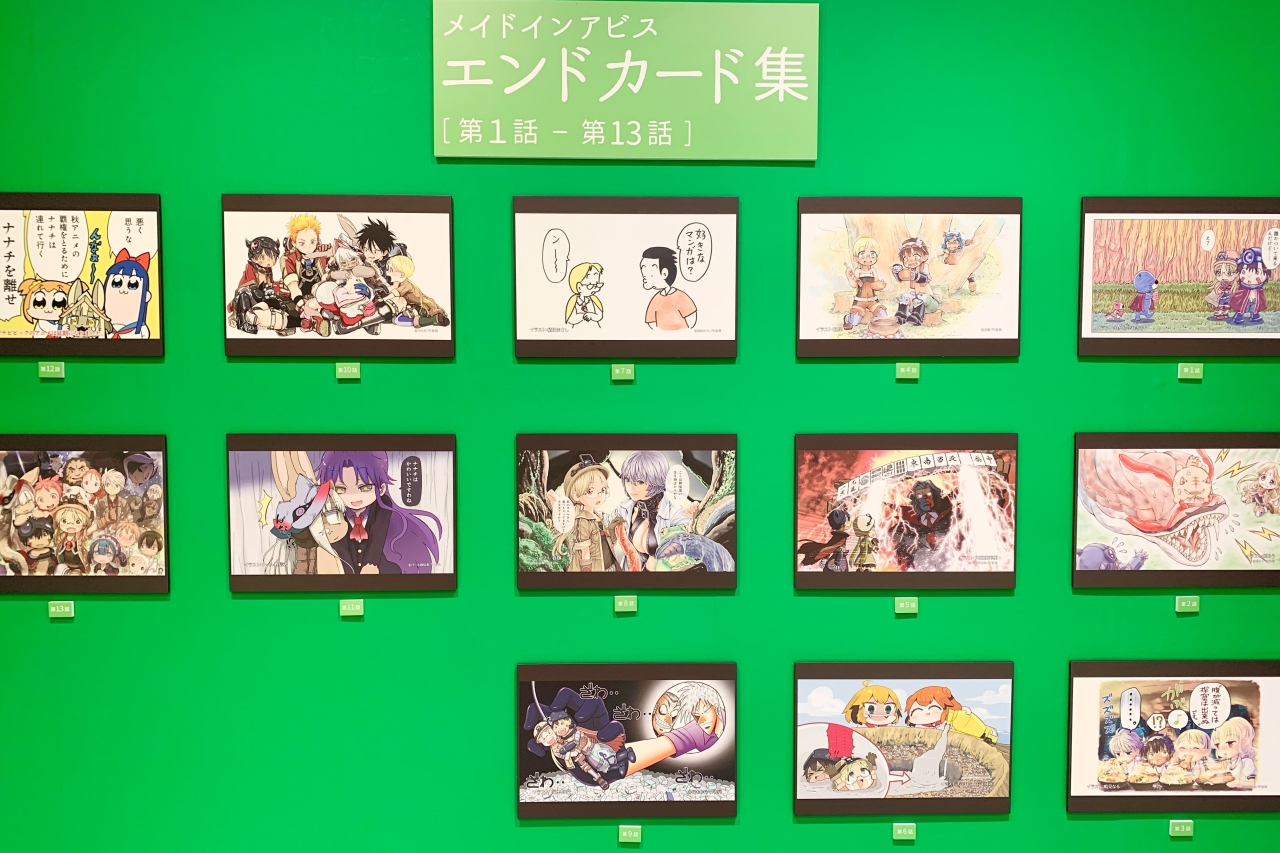 The end cards of the 1st and 2nd periods decorate the exhibition.

Tour the venue with Nanachi! "One Point Nanachi" has 3 patterns 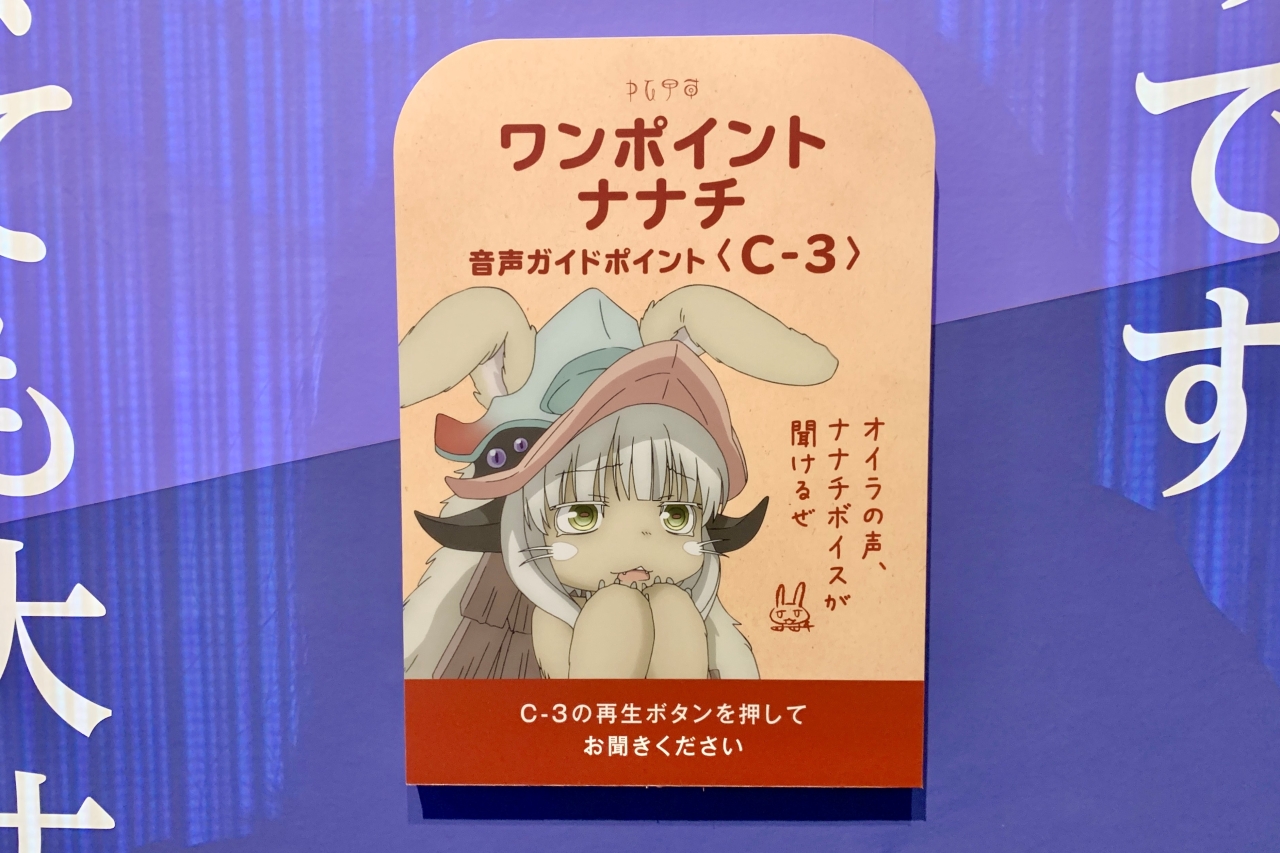 In addition, if you purchase a ticket with an audio guide, you can tour the venue while listening to the event's original "One Point Nanachi" , in which Nanachi speaks various messages according to the exhibition.

(*This is an audio guide that can be listened to on a smartphone with an internet connection. Headphones or earphones are required. Please check the official website for details.) 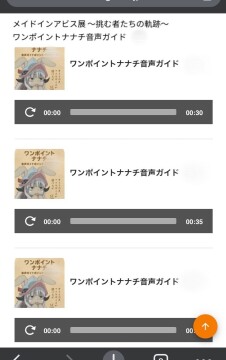 What I want to keep in mind is that when you enter the "One Point Nanachi", you can choose from all three patterns, A, B, and C.

In the pattern I chose, Nanachi gave a lecture on the words of the "made-up village" and warned Bondold to be cautious, but in another pattern, you can hear a completely different message.

Please note that you need to purchase 3 tickets to listen to all 3 patterns. 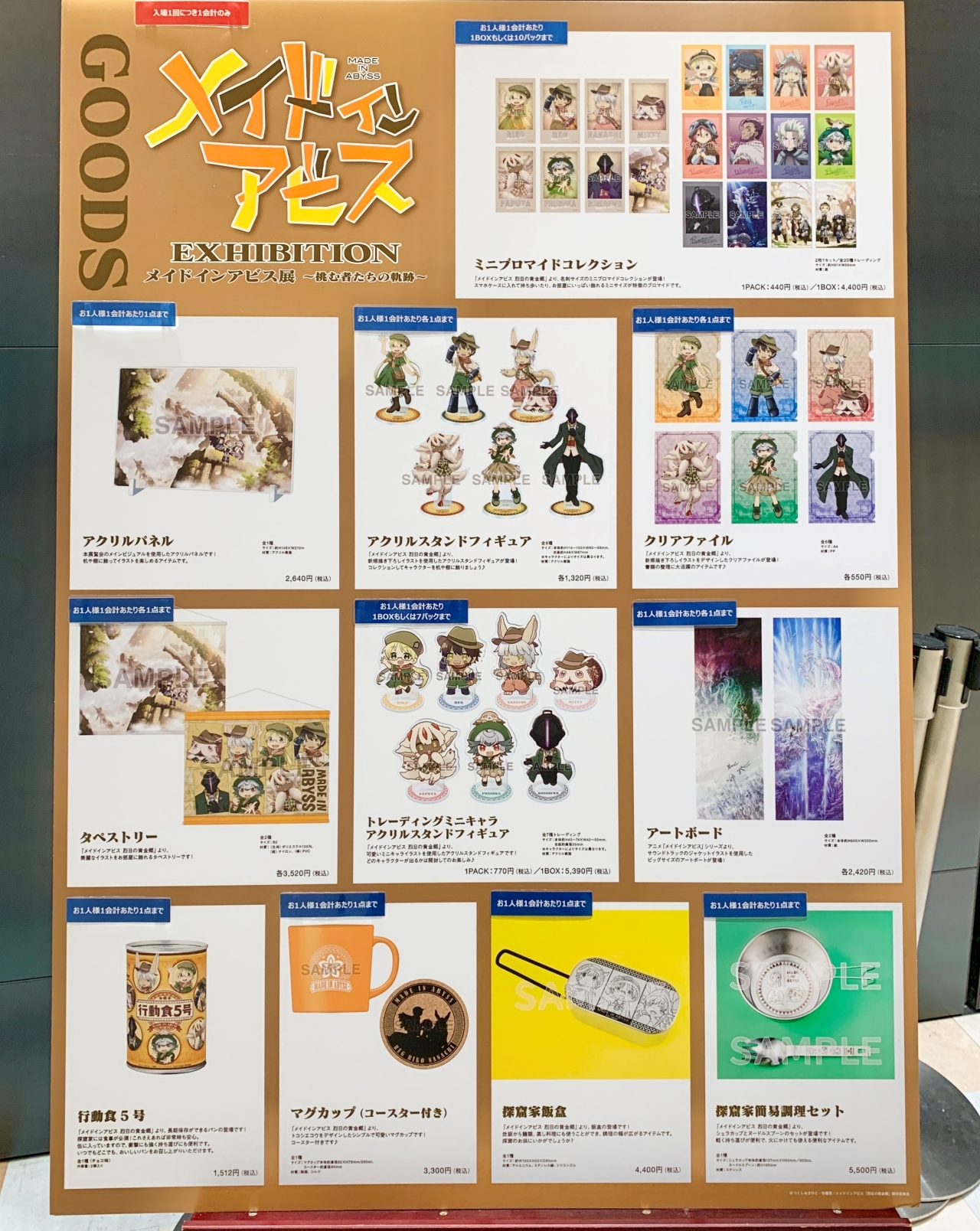 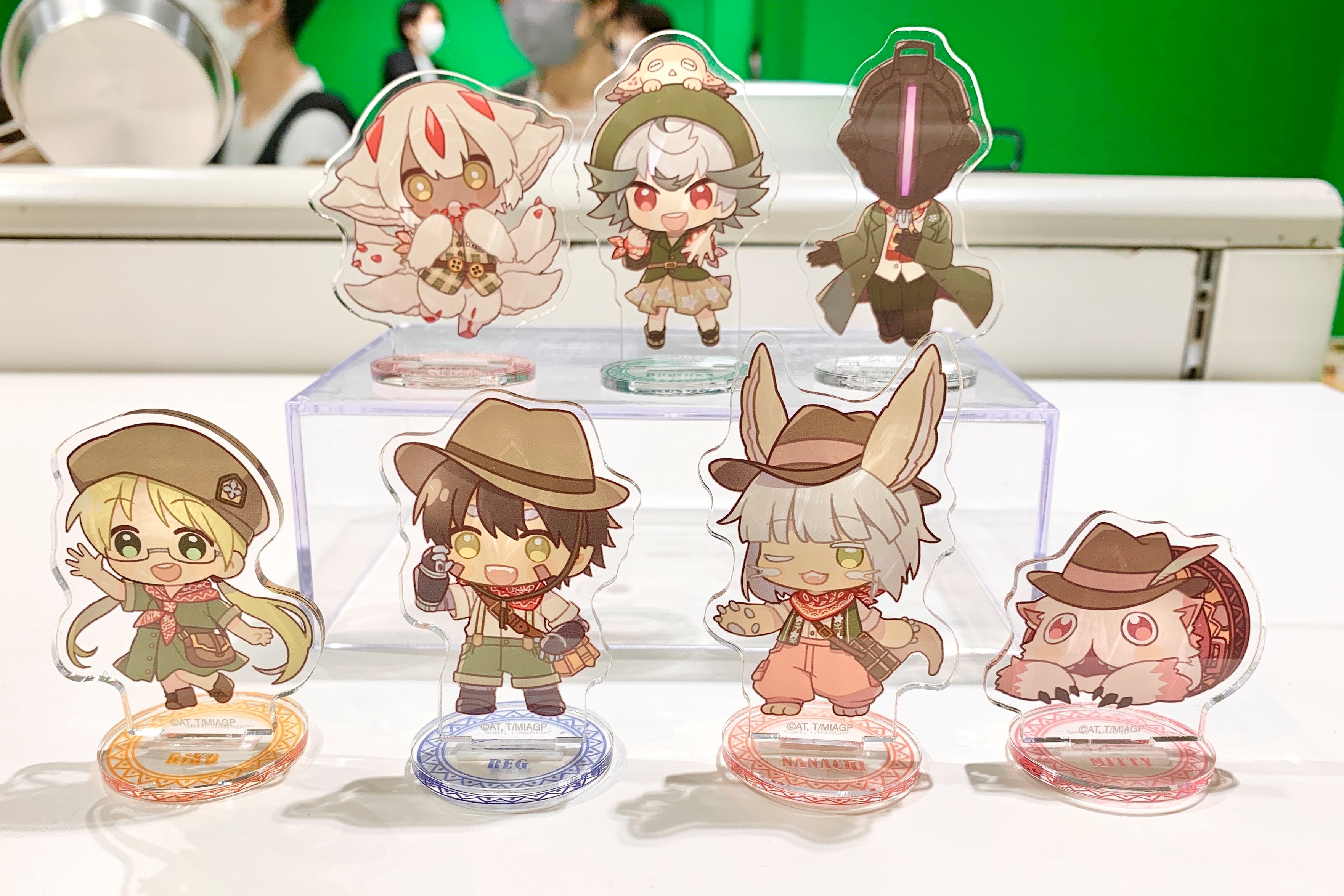 As exhibition commemorative goods, in addition to newly drawn illustrations "Mini Bromide Collection" and "Acrylic Stand Figure", there are also books such as "Explorer's Cooking Box" and "Explorer's Simple Cooking Set" that are perfect for outdoor adventures. Attractive products unique to the work were lined up. 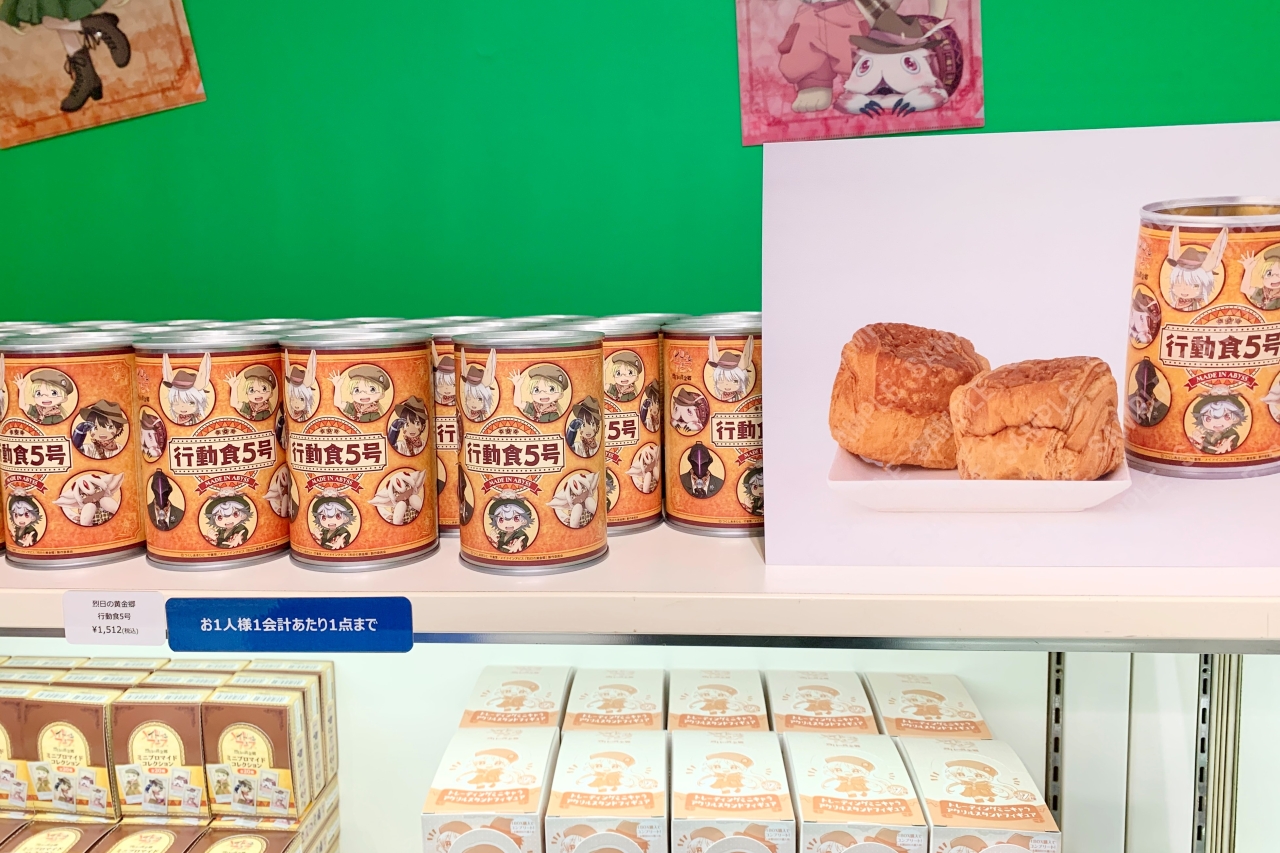 Made in Abyss Golden Land of Relentless Sun Action Food No. 5 (Price: 1,512 yen)

What I found interesting was this “Action Food No. 5” . When I asked the staff about it, they said that it was an improved version of the mobile food "Action Food 4" that appeared in the anime. That's what it is. It seems to last for 3 years, so it is also recommended for disaster prevention. 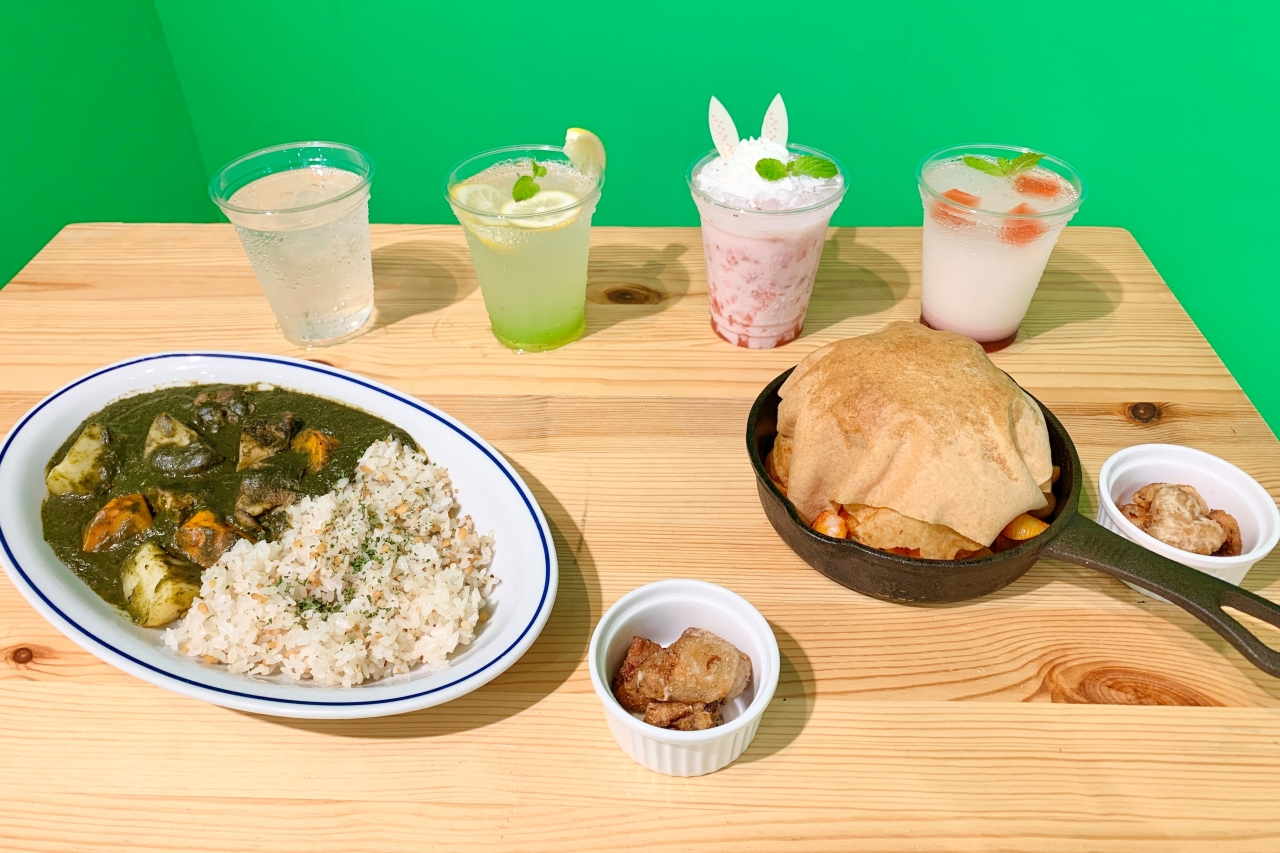 Part of the collaboration cafe menu

In addition, a special collaboration cafe commemorating the exhibition will be held at the cafe address on the 6th floor of the Ikebukuro Parco main building.

It seems that cute menus that image familiar menus and characters will appear in the work, but I was able to see some of the actual menus at the preview.

On the left is "Kubekasasu (Spinach Curry) ~Riko Tama Hatchery Baked~" (price: 1,500 yen)
Based on the image of the kubekyasu that can be eaten at the inn in the "made village", it is a curry rice that is slowly boiled with spinach and served with octopus zangi with the motif of rico ball hatching.

On the right is "Naredate Shokudo Limited Item (Arrabbiata) ~Riko Tama Hatchery Baked~" (price: 1,500 yen)
It is an arrabbiata that is inspired by the 'baked testicles' of the Narekate Shokudo, and is accented with the umami of tomatoes and the spiciness of chili peppers.

I wasn't able to eat it, but it smelled so appetizing and delicious!
It seemed to have a lot of volume.

In addition, parfaits, waffles, and various drinks are also available. If you order one item from the collaboration menu, you will receive an original novelty coaster at random, so be sure to check it out.

Looking back on the anime “Made in Abyss”, whose second season is getting more and more exciting toward the climax, “Made in Abyss Exhibition-Trails of Challengers-” will be held from Friday, September 2, 2022 to September 19, 2022. until the day (Monday). Please come and visit us.

Overview of “Made in Abyss Exhibition-Trajectory of Challengers-”

Dates: September 2nd (Friday) to September 19th (Monday), 2022
■Business hours: 11:00-21:00
*Last entry is 30 minutes before closing
*Last day closes at 18:00
*From the perspective of preventing the spread of infectious diseases, the number of visitors may be limited, business hours may be changed, and the facility may be closed.
■ Venue: Ikebukuro PARCO Main Building 7F PARCO FACTORY

*The contents of this article are as of the preview (September 1, 2022). It may differ from the latest information, so please check the official website for details.
*All prices include tax. 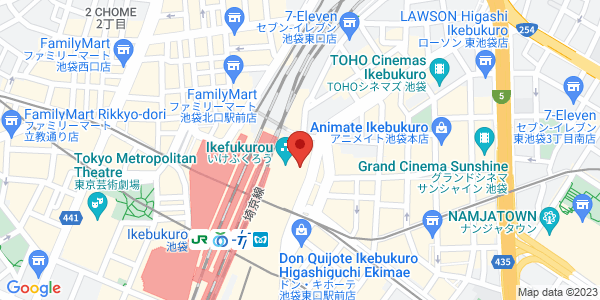 [Venue Report] "Towards the Age of Discovery – The World Opened by Marco Polo" Exhibition will be held at the Ancient Orient Museum! The oldest extant Fopel globe also appeared